Historic fish houses of Charlotte Harbor are sprinkled across the aquascape around Boca Grande. These curious shelters are little more than shacks on stilts, yet are heart-warming emblems of days gone by. 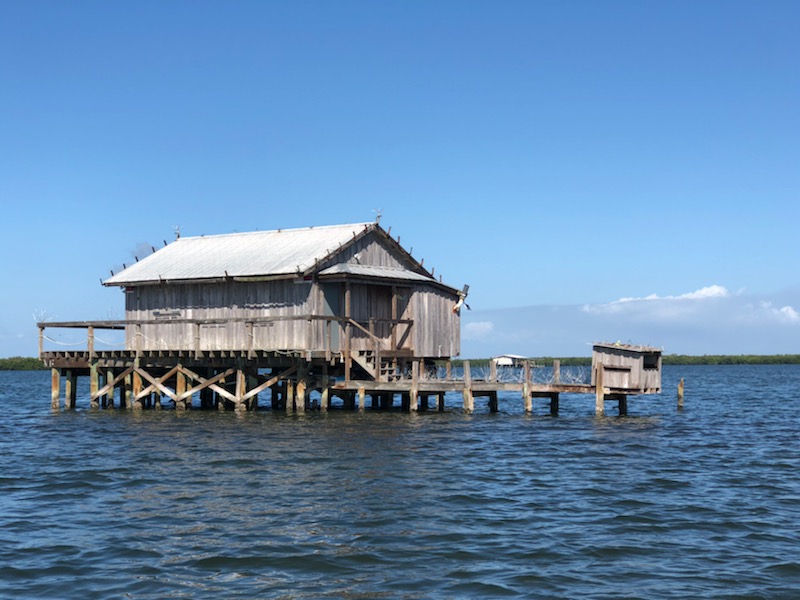 The fish houses make for a terrific focal point for the recreational photographer and professional alike. But, there is more to these simple cabins than meets the eye.

So, how did these Old Florida icons come about? In the 1890s, the port at Punta Gorda, Florida became a hub for Florida's fishing industry when a large ice plant was constructed.

The Punta Gorda Fish Company was established in 1897 by Eugene Knight and Harry Dreggors. It became one of the largest commercial operators in the area. The company had certain areas designated as its fishing territory and built a network of ice houses and residential fish cabins.  Located throughout Charlotte Harbor, Pine Island, and the Pine Island Sound,   these small fish cabins were widely used until World War II. 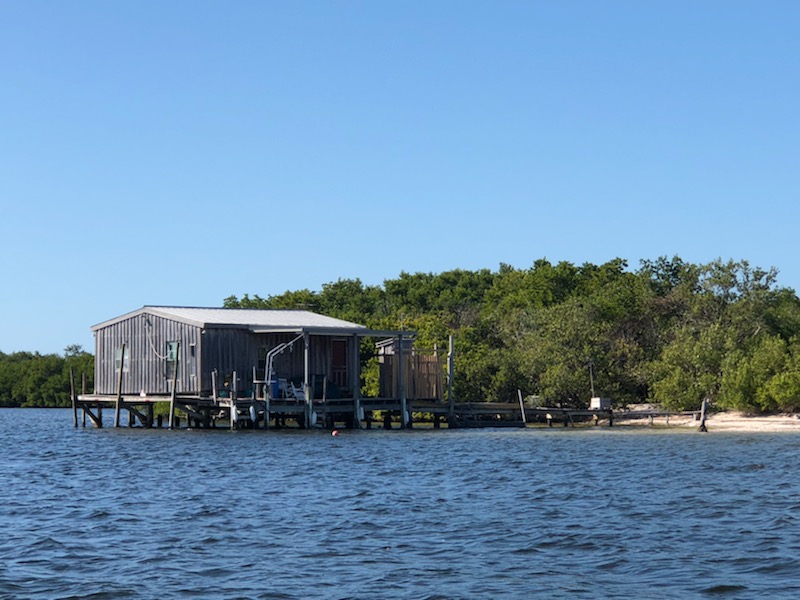 The small homes on stilts, built right up out of the harbor, made it possible for hard working fisherman to avoid returning to port for shelter, food and supplies. The crew of a fishing boat would sleep in the fish cabins and deliver their catch to the ice houses.

The ice keepers would then weigh the fish and provide fishermen with receipts that could be cashed at the company's office. The Punta Gorda Fish Company had little "run" boats which would travel from cabin to cabin to deliver ice, mail and supplies to both fish cabins and ice houses. They would return to the company's dock in Punta Gorda with the fresh fish, while the fishermen continued the work of harvesting the goods from Charlotte Harbor.

In a 2008 feature story on the area's historic fish shacks, The News-Press wrote:

Commercial fishermen ... lived months at a time in simple one-story wood-frame cabins on pilings in Pine Island Sound and Charlotte Harbor. They had no electricity, no plumbing, no telephone. Rain gutters collected water they rationed. ... The fish cabins ... are the legacy of a thriving industry that worked Charlotte Harbor waters before World War II. Fishermen netted fish by hand and stored their catch in the fish companies' ice houses, where boats picked up the harvest and carried it to Punta Gorda.

Some 230 persons were employed on its offshore fisheries and operated 140 run boats by 1897. In 1927, the Matlacha Bridge linked Pine Island to the mainland, reducing the need for the run boats. When the Great Depression struck, the fishing industry declined. In 1939, a large fire destroyed Punta Gorda's major fishing dock. The Punta Gorda Fish Company was one of the few companies to survive the fire and acquired some of the fish cabins previously operated by its competitors.

A large effort began after World War II, improving the areas roads and bridges. This led to an increased use of refrigerated trucks  to collect the fresh fish. And thus, the need for the quaint fish houses and ice houses drastically declined.

The company sold off many of the fishing cabins, to private owners for sport fishing, and many were converted into vacation cabins. The Punta Gorda Fish Company continued to operate until 1977. 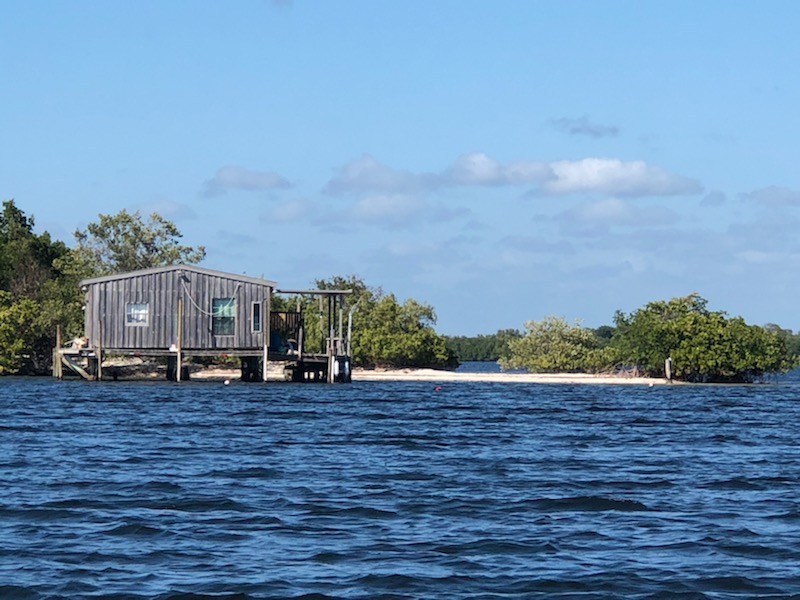 Destruction of the Fish Houses

In the 1980s, the state decided the old fish shacks, with no plumbing and sanitation, were a threat to the natural sea grasses and a navigation hazard. Florida's Department of Natural Resources began burning the fish shacks in the mid-1980s.

As has happened many times over in this area, people stepped in to advocate for the historical value of the fish cabins. In 1991, the preservationists succeeded in having a number of the structures designated as historic sites. 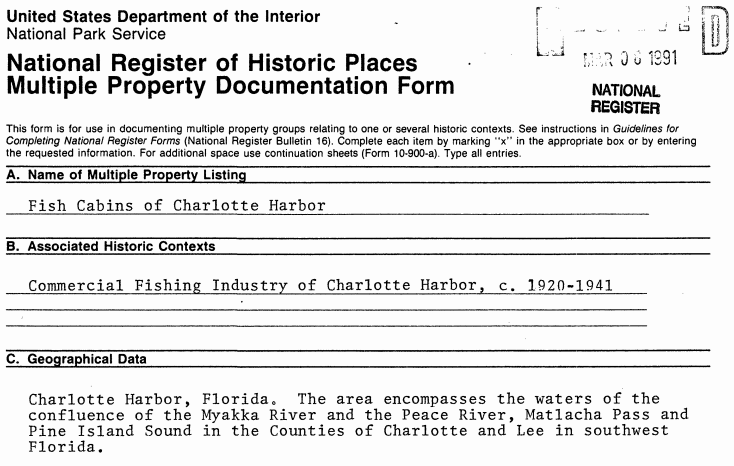 At least seven fish cabins and three ice houses, have been listed on the National Register of Historic Places. See a list of historic fish houses here. The cabins and ice houses are "frame vernacular cabins set on wood pilings" and were all built on submerged land between approximately 1920 and 1941.

Most of these were added to the National Register in a 1991 Multiple Property Submission titled the "Fish Cabins of Charlotte Harbor." It cited their significance and historic value in the southwest Florida commercial fishing industry. The document cited "their architecture, materials, and workmanship" as examples of distinctive and functional architecture.

The fish houses can be found scattered around Charlotte Harbor still today. While no major changes can be made, repairs have been done over the years for maintenance. 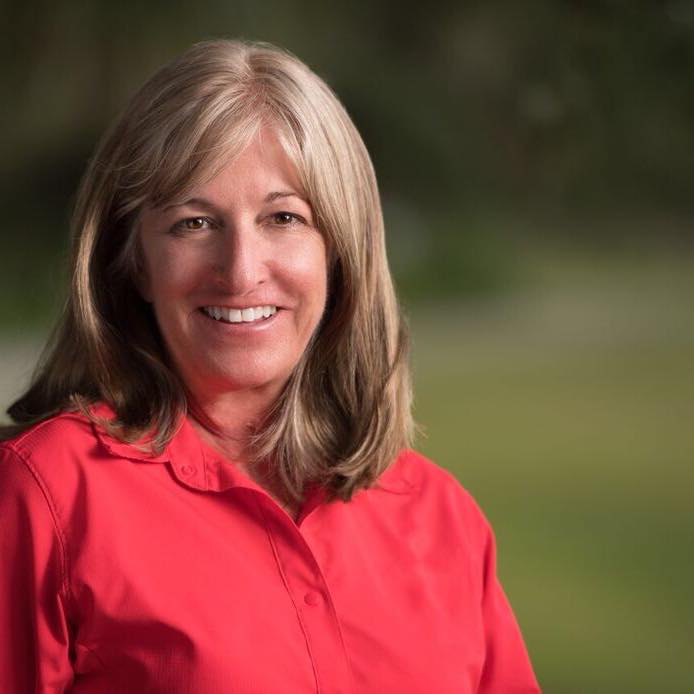 Carol Stewart is your Boca Grande Local with a Global Network. As the top individual sales person for Michael Saunders & Company, several years running, her expertise is paramount.

Ready to find out more?

For the countdown to Valentine's Day, I'm sharing

Wouldn't you like to fall asleep with the sounds o

Hope you are enjoying a refreshing and relaxing Su

I'm here to introduce you to your dream beach hous

Is this the beach house you’ve been waiting for?

Don't let your Dream Beach House get away in 2023

It's hard to believe another year has gone by in B

Happy Hanukkah - in 2022 is observed on sundown of

Check out the new listing on the mainland, co-list